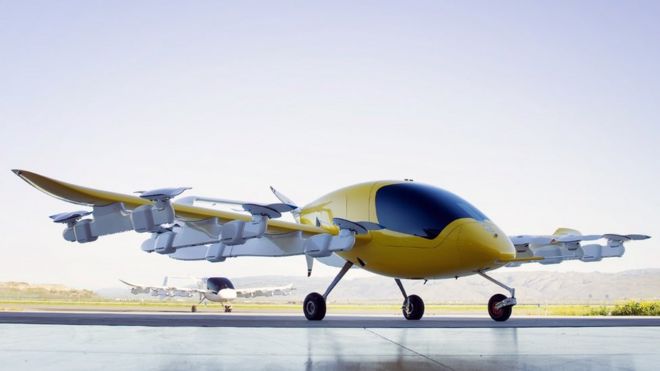 A firm funded by Google founder Larry Page has unveiled an electric, self-flying air taxi that can travel at up to 180 km/h (110mph).

It can do 100 km on a single charge, and it takes off and lands vertically.

It will eventually be available to customers as a service "similar to an airline or a rideshare" said parent company Kitty Hawk on the Cora website.

The aircraft has been developed in New Zealand, where the government said it welcomed the project because of its environmental credentials.

"We've got ambitious goals here in New Zealand, we want to get to net zero emissions by 2050 and that includes mobility," said Dr Megan Woods, minister for research, science and innovation, in a promotional video for the aircraft.

The firm said it is now working "constructively" with aviation regulatory authorities but declined to put a date on when Cora might start work.

This type of aircraft is known as an eVTOL - which stands for electric Vertical Take Off and Landing.

One expert told the BBC that while there are many varieties of eVTOL in development - mostly in secret - Cora was an interesting model.

"Vertical take-off and then changing to winged-flight is quite a feat of engineering," said Steve Wright, associate professor in aerospace engineering at the University of the West of England.

"We have been doing it for a long time but that doesn't stop it being hard. Doing it with batteries is even more impressive."

However he said that battery tech was holding back innovation.

"For 150 years engineers have been spoiled by hydrocarbons - petrol and oil - because they stuff a huge amount of energy into a small space," said Prof Wright.

"Everyone would dearly love a battery that could store 10 or 15 times as much charge.

How can we help you?

Contact us at the Paragon Guards office nearest to you or submit a business inquiry online.